How Much Food Is Too Much for My Child? 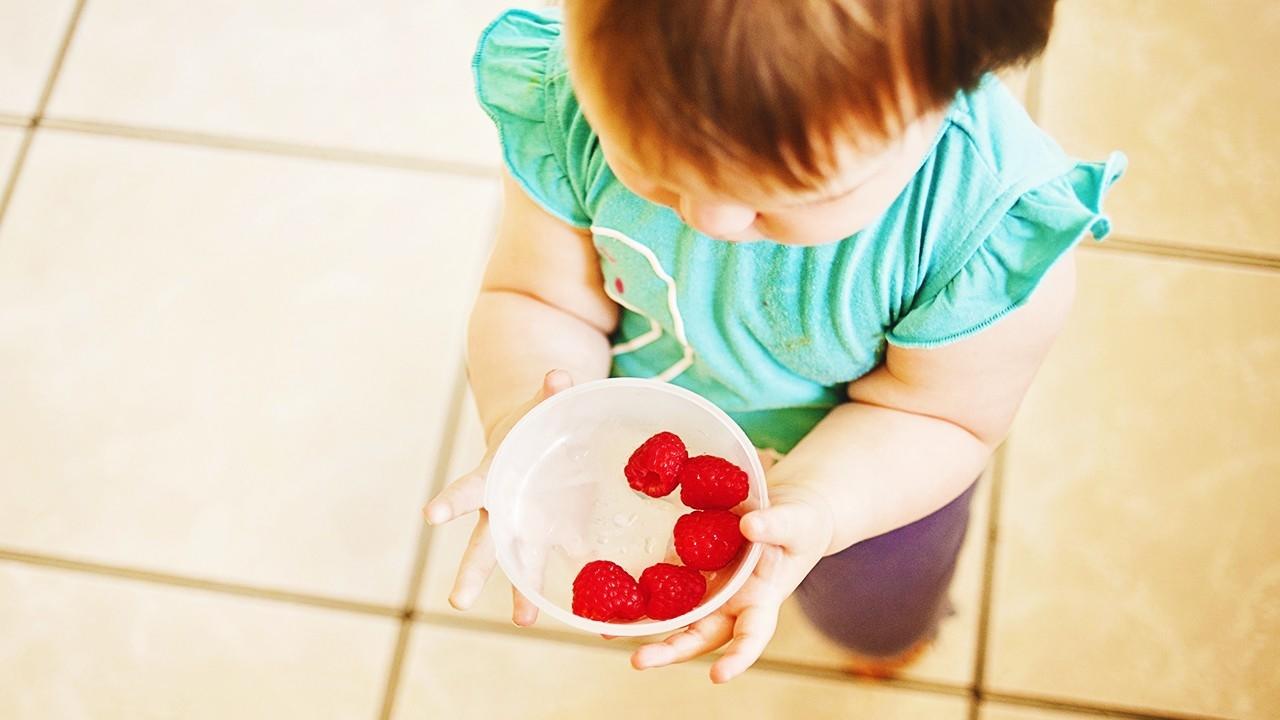 Last summer I sat on the beach watching a family on holiday. The father had just bought a large but individual bottle of fizzy pop for his son who was an overweight teenager.

The boy drank what he wanted and left the rest.
The father, wanting to “get his money’s worth” from the bottle urged him to drink more.

Looking at the scene from the outside, gave me a chance to reflect.

It’s easy to be critical of the father when it’s presented in this way.

I wonder if he knew exactly how much sugar was in that drink and exactly what an appropriate portion for his son is. I doubt it!

When we stop and think, we’ll probably find that we’re guilty of similar acts.

In fact, a recent survey in the UK found that 79% of parents offered their toddlers too much of “easy to eat and treat food”. 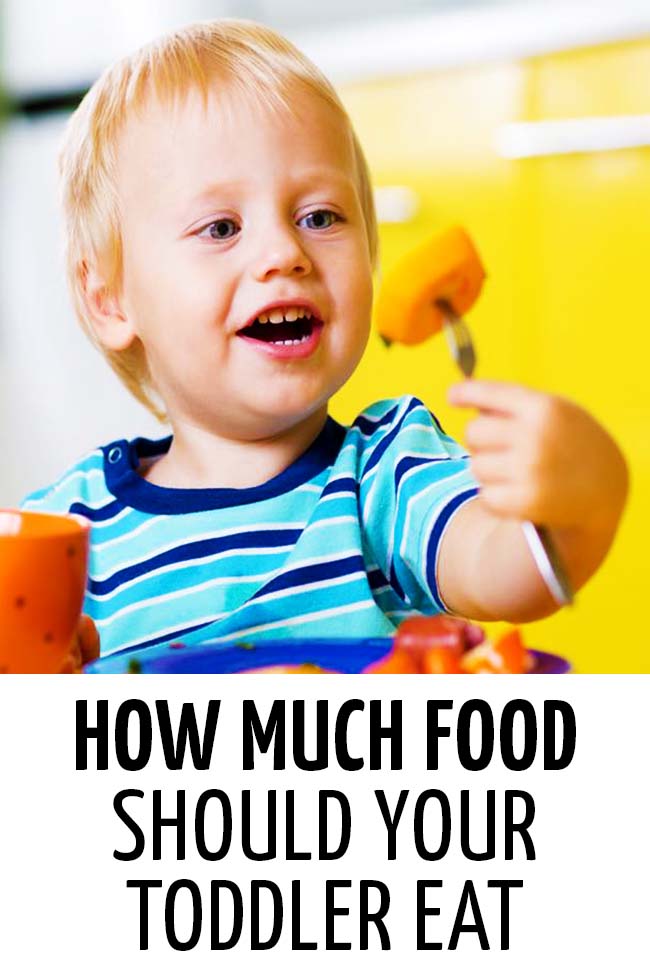 We Eat More Now that We Used To

Healthy eating is a combination of WHAT we eat and HOW much we eat.

In the developing world, more and more people have problems with obesity. This is because people are eating foods that are not healthy and they eat far more than they used to.

This is called portion distortion.

If we look at the American diet, taken from a book by Dr. Stephan Guyenet, he says that between 1970 and 2010 there’s a 20% increase in what the average American eats and that is huge!

For example, 20 years ago, an average burger was around 330 calories and now it is 590 calories. The difference is an hour and a half of lifting weights but people are not doing the extra exercise.

This is what we call portion distortion and it also applies to children.

We have as idea of what is a normal adult size portion and we often forget that our children need much smaller portions than us.

Related:  How to Help Your Children Learn Healthy Eating Habits 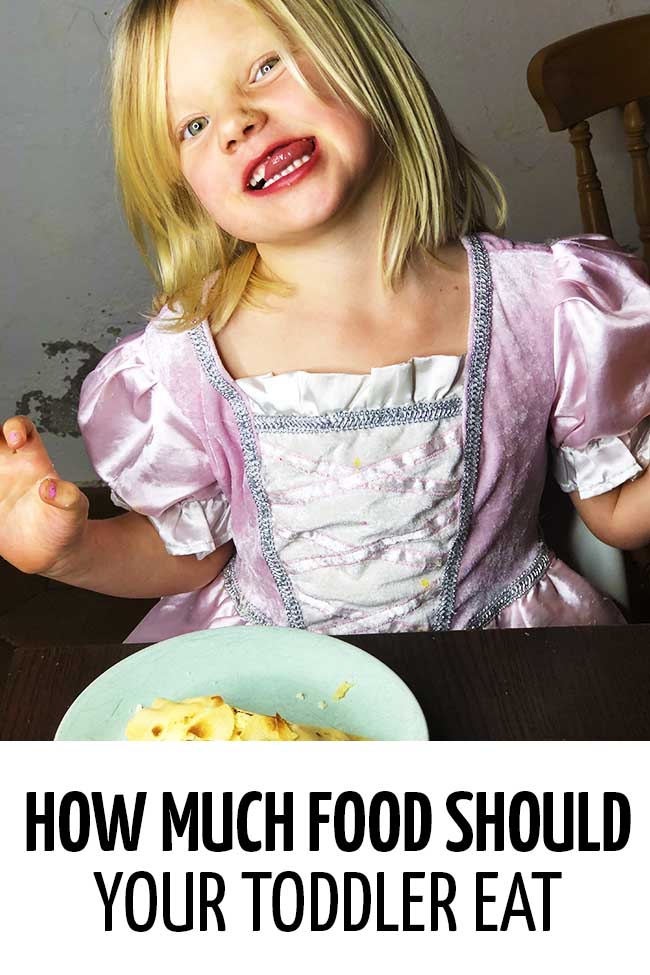 The Infant Toddler Forum did a survey of a thousand UK parents and the results are the following:

This shows that we are worried that our children are not eating enough and we are compensating by giving them more than they need.

A way to find out if your child is getting enough to eat is to see if he or she is growing. Because a child who doesn’t get enough calories will not grow properly.

According to the same survey, toddlers are offered portions closer to adults size portions. 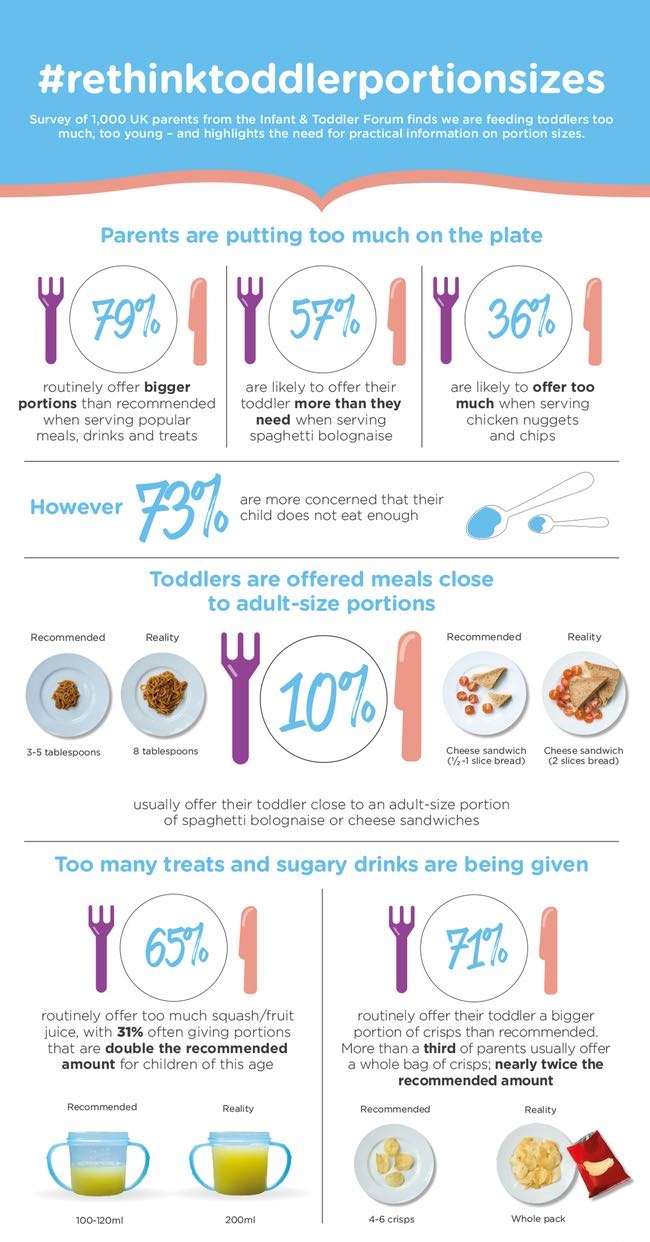 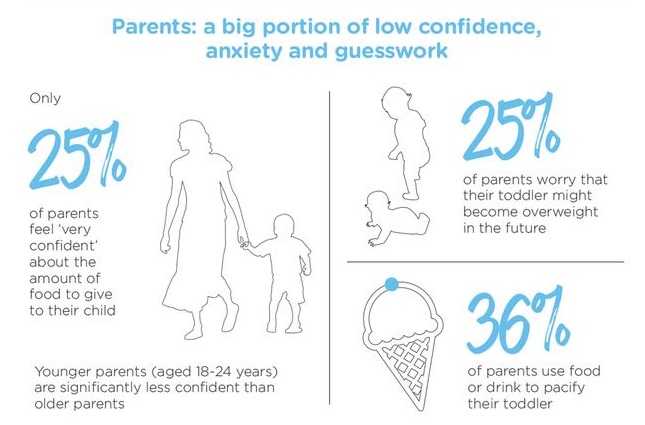 How Can We Prevent Our Children From Overeating? 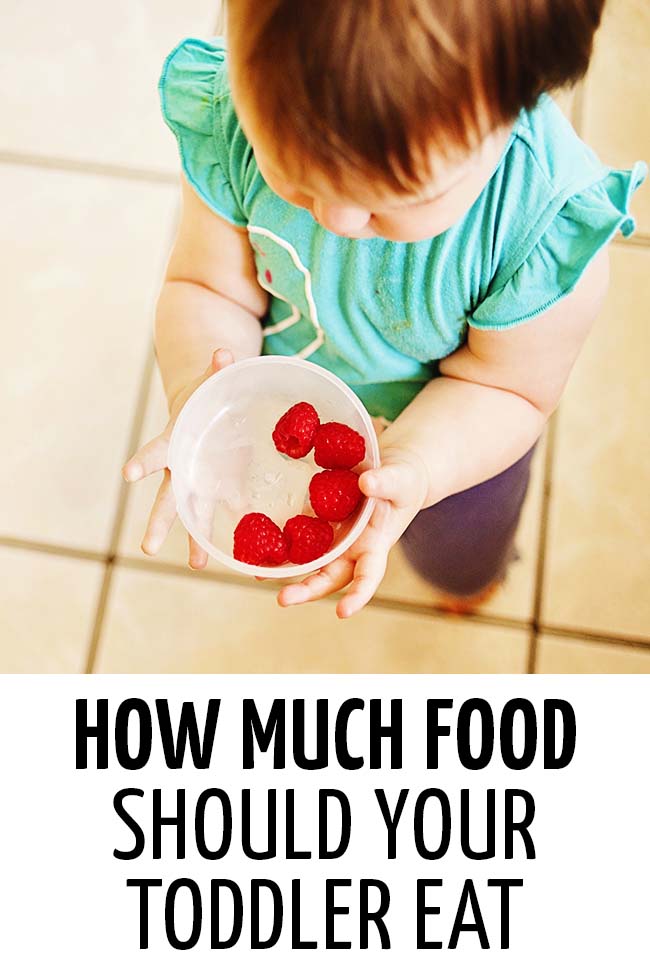 What is an Appropriate Portion?

An appropriate portion for a toddler is roughly what they can fit in their palm.

Obviously this is a really rough estimate because different foods have different sizes. But in a child’s hand, you can fit two or three sweets, not the whole packet of sweets.

It is a good rule of thumb but it is not accurate.

If you want to be accurate what I recommend doing is going to the Infant Toddler Forum and they have lots of examples of foods and what the ideal portion size for children ages 1 to 4.

Go and check out their portion sizes as a guide.

You don’t have to get totally obsessed by this but you just have to get into the habit of offering smaller portions and allowing them to ask for more.

If you are in doubt, I recommend doing the TOT IT UP CHALLENGE  by the Infant Toddler Forum. It’s like a food diary. You just need to put in what your child eats and includes the amount of activity they do. This way you can get an idea if they’re eating lots of one thing or too much of another or not enough of another thing.

Related:  HOW TO STOP KIDS PREFERRING SNACKS TO REGULAR MEALS

Another thing that is interesting to think about is the plate that you offer food on. 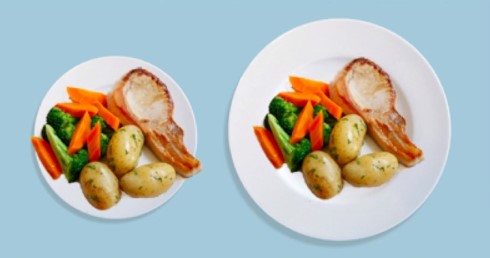 If you see the one on the left, you can see that it looks like its overflowing and if you have that plate you will think that you have lots of food.

But when you put the same amount of food on a bigger plate, you will think that your plate is sort of empty and that you don’t have enough food.

That is what your brain thinks despite the fact that they are the same portion!

What Should Children Drink?

We have this idea that orange juice is healthy. Well, it is full of naturally occurring vitamins and minerals and by no means  as unhealthy as fizzy lemonade. However, it is still orange juice without all the fiber which has been taken out..

Children should be drinking mostly water (or milk for younger children).

Other drinks such as orange juice should be considered a treat (i.e. not to quench your thirst but as a pleasant thing to drink, remembering it contains lots of sugar.)

Presenting orange juice and other sugary drinks in a small glass will help you to give your child an appropriate portion.

Small plates and small glasses are a good way to moderate the portions that we give.

Related:  HOW TO GET YOUR TODDLER EAT MORE VEGETABLES

How to Help Your Child Not Overeat in Summary 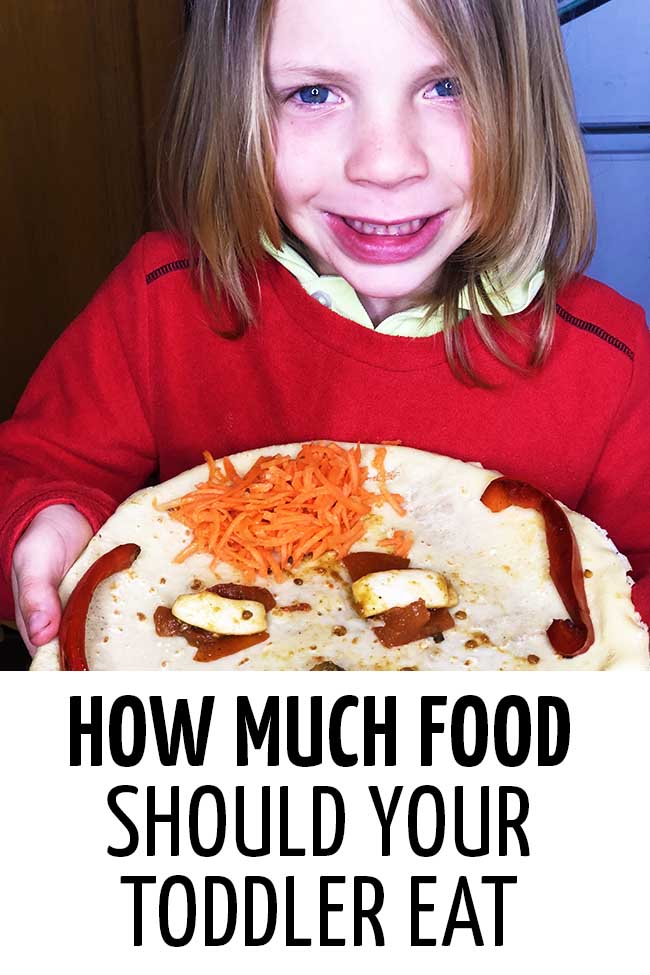 I didn’t speak to the father on the beach, but if I had done, I would have told him that his son should be cold drinking water in the hot sun to quench his thirst (as much water as he wants!)

I also would have told him that it’s lovely to have a fizzy drink from time to time, especially when you’re on holiday, but that an appropriate sized portion is sufficient (especially if your son is saying he’s had enough.)

Do you think about your child’s portion size when they eat?  If not, the next time you sit down to a meal, allow your child to serve a small portion and come back for seconds.

Learn how to feed your toddler a healthy diet in a stress free way...without pressuring or nagging! 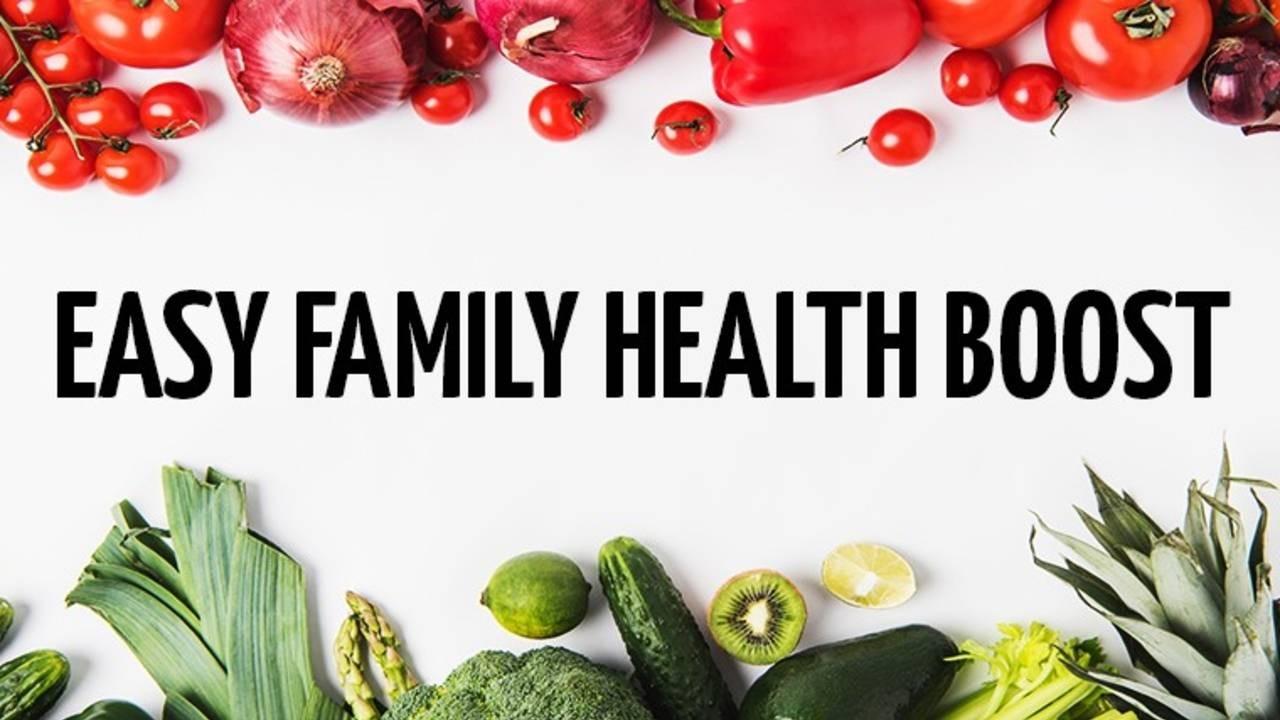 PLUS grab a free copy of YUM recipe book when you join the free membership site. (You need to create a password.)